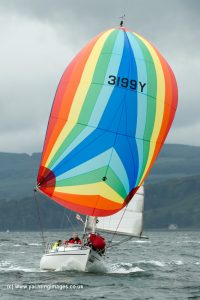 The only way the first day of west highland yachting week could be described was “interesting”. Light winds and a bit of drizzle meant that the racing was very tactical with decisions making or breaking a boats chances of winning depending on weather they found wind or fell into a hole. The start for class 8 Was very close with many boats almost over the line with seconds to spare but the gun went and they were off. As the fleet powered to the Island “Popcorn” steamed ahead finding a pace the rest of her class could not keep up with and the first few spinnakers were being flown on the reach to the island.

Rounding the tip of Eilean Gamhna Island the fleet split with the faster boats heading round extra marks to keep the fleet even, that gave us breathing room to see “Popcorn” put more distance between us and we began our slow beat up to Kilchoan Bay. After some of the faster boats began to pass us we rounded the mark and hoisted the rainbow spinnaker and set off for the tip of Shuna. A few more boats passed us and we began to round the tip but not before a few larger boats had muscled their way through and caused some commotion and it was a miracle that no one was rammed. 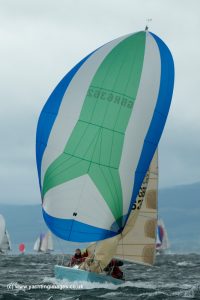 We gybed the spinnaker just as the rain started and proceeded to make way towards the finish line at an agonising pace. we held our spinnaker for as long as we could but in the end we had to pack it to point upwind toward the finish line. We crossed the line after two and a half hours of sailing and we motored back in to some tea in the cabin. We found out that Popcorn had gone on to claim overall victory on handicaps while we had come 6th in class.