As everyone was leaving the marina for the first race it’s safe to say we were pretty optimistic about the weather. Applying sun cream and changing into shorts we were looking forward to a nice dry sail hoping that this would not be another ‘Wet Highland Week’ and a sign of what’s to come, but of course we should’ve known better.

Shadowfax pulled of a cheeky port end start and led for most of the first round whilst we can only assume Mr Tunnock was still busy dishing out superior quality confectionary giving everyone else a chance as he was 5 mins late to the start.

After the start things got very shifty when it turned into a game of Snakes and Ladders with Amber Haze reaching the top of the final ladder for a well deserved first. 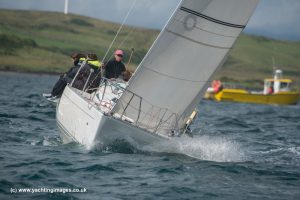 A few soggy sandwiches later in the pouring rain it was time to set of for race 2.

With the wind dropping by the second Leaky Roof 2 tried a risky port flyer and let’s just say it was more flop than fly.

With the wind dropping to 0kts and the rain clearing away, the whole fleet came to a standstill while the committee boat Chico shortened the course to just 3 rounds. Sitting in complete silence the Roofers were running out of ideas and energy so we took to the stash of caramel wafers for inspiration which seemed to work until one member dropped the main halliard instead of the pole up-haul smashing the boom full force onto his wife’s head but more importantly slowing the boat down!

At the end of a rather long day Leaky Roof 2 managed to Schneckle their way past the rest of the Class members to top place even managing to overtake Carmen 2 from Class 3.