6 hours of snakes and ladders even drove the skipper to a performance of American pie behind the wheel. There was many stops and starts resulting in the fleet bunching together, raising tensions getting the skipper all agitated that we were being passed left, right and centre. The lack of wind made getting a lead very difficult and we had hoped the last beat to the finish would be enough to pull away from the fleet, however today we were not so lucky. 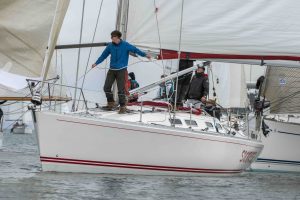 To our delight, the chocolate box appeared on deck and Max, the youngest of the crew age 12, lost his tooth to a curly wurly during the run down the sound of Shuna.
The wind strength and direction was, for the most part, nothing from no where.
However, it was predominantly south and finished in the west. When the rain came on, the steak pies and special hot chocolates fortified everyone’s spirits.
At the end of the day, it’s the taking part that counts and the real prize is the memories made.
-Storm Chalmers, sunrise